For Machinery Off Rail 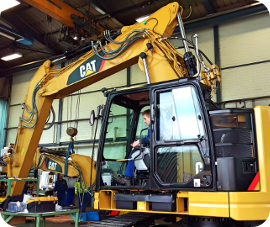 The PTLS OffRail system assists the operator in establishing a safe work area through limiting the machines slew-, and height-movement by using specially developed proportional valves. The movement-limits can be programmed by the operator, without prior knowledge, from within the cabin via 3 buttons.

During crane-work on railways or near chemical factories it is essential to limit the movement-area of the crane. PTLS CRANE assists you with this task. Our specially developed proportional valve-, or CAN BUS-controls stop the cranes movements very smoothly, thus preventing material-wear and retaining the machines stability.